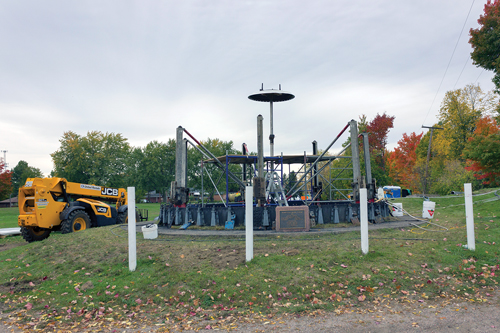 The Shawville water tower slowly shrunk over the course of September as it was mostly dismantled by construction workers in order to replace the top three rings.

SHAWVILLE – The Shawville water tower has been progressively shrinking over the last few weeks as a contractor removes its top three rings, which
were identified as needing replacement during a spring inspection. The work began September 8, about a month later than originally planned due to COVID-related delays in getting parts and supplies.
To replace the rings, the tower was emptied and for the most part, dismantled. The same contractors who installed the tower in 1989 are doing the work and Jessica Nilsson, municipal water technician, estimates it make take “another month or so” before it’s complete.
While the water tower is under construction, the town’s water supply is coming from spring beds and wells. In the months leading up to the project, the municipality encouraged residents to adjust their usage so it was routine when the work began. Residents will likely notice some water pressure differences, but the quality of the water isn’t affected, said Nilsson.