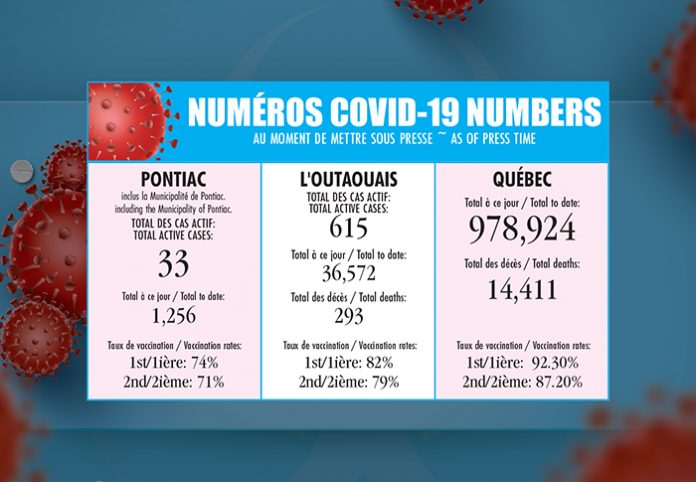 QUEBEC – Amid rising infection and hospitalization numbers due to the BA.2 variant, Dr. Luc Boileau, Quebec’s interim public health director, held a press conference on March 27 to warn residents to be cautious given that the province is witnessing several indicators of another wave. However, he said it was too soon to say the sixth wave is officially here,

The following Tuesday, April 5, he reversed his statements and extended the mask mandate until the end of April. He also reminded Quebecers who test positive that they must isolate for the first five days and then remain vigilant for the following five. “The pandemic is not over,” said Boileau.
No other restrictions were re-instated.

Quebec Premier Francois Legault tested positive for COVID on March 25 and was in quarantine for five days, although he said he felt relatively well.

On March 23, the Municipality of Pontiac announced via social media that a number of employees had contracted the virus and they had closed the offices to the public; they expected to re-open Monday, March 28th.

Starting March 29, a fourth dose of the COVID vaccine became available for those at risk of developing complications from COVID; those living in public and private seniors residences or family-type resources (CHSLDs, RPAs and RR-RTFs), those aged 80 and older, and the immunocompromised.

“An interval of 5 to 6 months is recommended, but a person can receive this second booster if a
minimum of 3 months is respected,” says the provincial COVID website.

Appointments can be made online at Quebec.ca/vaccinCOVID of by calling 1-877-644-4545 for those experiencing technical difficulties.

The province’s vaccine passport system hasn’t been required in most places since March 12, but residents are encouraged to keep their proof of vaccination in case it’s needed in the future.

Starting March 12, people who’ve been in contact with a confirmed case of COVID and who do not have symptoms no longer have to isolate. Instead, for ten days they must self-monitor for symptoms, wear a mask during interactions and refrain from visiting locations where masks must be removed like when eating at restaurants.