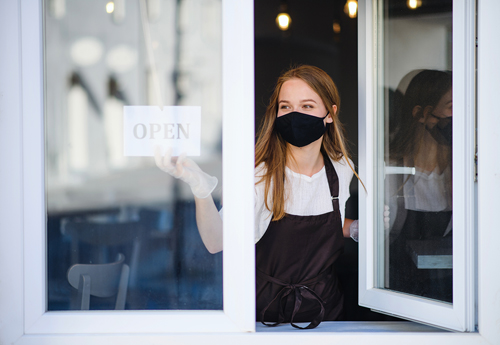 Nearly a third of Québec’s small business owners fear their businesses will not survive a second lock-down, says a study the Canadian Federation of Independent Business (CFIB) completed at the end of November. Only 34% of those surveyed said their revenues were either the same or more than usual leading into the holidays, a trend that has continued following the announcement of provincial lockdown measures until at least February 8.
“Business is terrible. I don’t know how long we are supposed to keep doing this. We are faced with six weeks [of reduced operations] with no relief in sight,” said Rhonda Meisner, co-owner of Stedman’s in Shawville, which is open for curb-side pick-up only.
On December 17, the MRC Pontiac joined most regions of the province in entering the maximum alert level, which closed all ‘non-essential’ businesses and limited those open to only selling ‘essential’ items. Restrictions were due to lift on January 11, but were extended until February 8. However, non-essential items can now be sold via curbside pick-up.
The restaurant industry is also feeling the strain of the times, with operations reduced to take-out or delivery. “Our business has reduced by more than half and December was our worst month so far,” said Gaetane Denault who
co-owns Magnum Outfitters in Mansfield.
The tourism industry was one of the hardest hit, but according to Jim Coffey, owner of Esprit Rafting in Mansfield, surprisingly, the summer season went really well. However, while revenues ended up being about average, per person expenses increased because of sanitation and social distancing requirements. To bring in additional business, Esprit created a mini water park and sold wood-oven pizza this summer, but Coffey is on standby to see if the winter part of the business, rafting down south, will be able to move forward.
Funding available
Since the beginning of the pandemic, various federal financial assistance programs for businesses have been announced including the Canada Emergency Wage Subsidy, the Canada Emergency Business Account (interest-free, partially forgivable loans up to $60,000), the Canada Emergency Rent Subsidy, the Regional Relief and Recovery Fund (partially forgivable loans that are interest free if repaid by 2022), and most recently, the Highly Affected Sectors Credit Availability Program for the hardest hit industries (low-interest loans up to $1 million for up to 10 year terms).
Québec also dished out funds through the Emergency Assistance for Small and Medium Enterprises (loans less than $50,000), Temporary Collaborative Action Program for Businesses (loans over $50,000), and Assistance for Businesses in Regions Under Maximum Alert for those ordered to close during the second wave (loan forgiveness for aforementioned programs, up to 80% of loan or $15,000, to cover core operating costs).
However, since most assistance is given in loans, it’s creating challenges for some businesses and the uncertainty of the pandemic has discouraged others from applying.
“The payments on our federal loan begin this month and it’s $1,250. We haven’t even made that much this month and I also have four employees,” said Meisner.
Denault said they didn’t want to risk applying for assistance. “We don’t know what’s going to happen with the pandemic, so we didn’t want to take any chances [by taking on debt]. We’re trying to get by with what we have,” she told the Journal.
Coffey said Esprit was at a crossroads. “We are cautious about taking on more debt, but at the same time, with no revenue coming in, we saw it as a stop gap to get us through. Without it, things would have been very challenging. We have to pay it back, but at least it was able to sustain us,” he explained, noting he received both federal and provincial (through the MRC) funding.
Linda Williams of Serenity Salon and Spa is experiencing the second forced closure of her business since the pandemic began, but her decision to avoid funding programs was different. “We own the building I’m working in so I have no overhead expenses. I feel others can benefit more from the money and I didn’t want to take it away from a more needy business,” she said.
Coffey applauded how quickly and simply funding was rolled out. “There was responsiveness. I was very appreciative to be able to access these programs since it’s a sink or swim matter in other countries, but would I like access to more? Yes!” he said.
More needed?
According to Pontiac MP William Amos, the federal government is responsible for eight out of every 10 dollars spent on COVID across the country. He said he understands taking on extra debt or credit isn’t an option for some businesses, but that direct funding programs like the wage and rent subsidies are available to alleviate some of their burdens.
“More support will always be needed, but the federal government kept up their end of the bargain. We’re the ones spending the money, and if there’s a sense that there’s not enough support or more to be done, it’s time for the provinces to step up to the plate,” he said, adding that most reactions have been positive.
Meisner emphasized that support hasn’t been equal from the federal and provincial governments. “Québec has done almost nothing to alleviate the burden on small businesses,” she claimed.
Pontiac MNA André Fortin agrees that additional, need-adapted funding is essential from the provincial government. “Most programs are set up as loans, which may work to pay bills temporarily, but will leave businesses with long-term debt. Direct aid is the only form of programming that can help business owners survive the crisis and find themselves on stable footing once the crisis ends,” he
concluded.