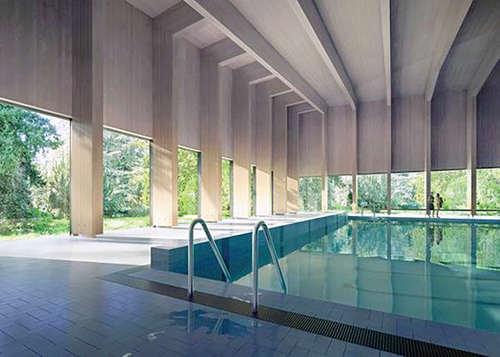 FORT-COULONGE – The process to build a pool and fitness center in the Pontiac is “two steps forward and one step back”, according to Todd Hoffman, president of The Piscine Pontiac Committee. The project has been scaled back from an $11.4 M, two pool facility with ample office space, to a $5 M building that will house one pool, smaller offices and an overall smaller square footage, all to be located on two acres of property the Municipality of Fort-Coulonge sold to the committee for
$1 in 2020.
A $140,000 grant from FARR enabled the committee to contract an architect and engineers who conducted a public survey, completed engineering work on the soil, and drafted plans for the original building, along with a 147-page funding application to Loisir Sport Outaouais. When word got out that 2020 was an especially competitive year for the grant, Hoffman said the committee initiated a more enticing Plan B: a smaller scale project, completed with all the original plans on a smaller scale, including a 25 metre pool, gym and innovative use of wood throughout.
The new plan will see lower operating costs, a priority residents cited in a survey this past spring that was overwhelmingly in favour of the pool: 82% of those who responded supported the development. Hoffman noted that the response rate was a good sample size for a survey: about 8-10%. He said it was enough for the
committee to commit fully to the project, knowing residents and stakeholders like school boards and CISSSO, the region’s health authority, want such a facility. The committee remains undeterred, said Hoffman, largely due to public support.
The project is also eligible for a $1 M grant from the Québec Ministry of Natural Resources for innovative use of Québec wood, which Hoffman said has been incorporated into the plans: vertical walls, roof structure, and flooring.
The committee doesn’t have a timeline for construction; it’s dependent on fundraising and the need to raise capital to access grants. Shifting the priority from government grants to corporate, private and resident contributions, there are plans to roll out a fundraising campaign this spring, complete with a social media
presence.