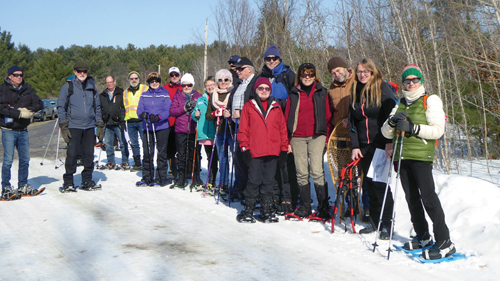 About 30 people snowshoed through history during the Friends of Chats Falls’ third annual snowshoe tour.

MUNICIPALITY OF PONTIAC – It was a gorgeous day for the Friends of Chats Falls’ third annual snowshoe tour, February 23, where close to 30 participants gathered near the end of Chemin du Canal, which was once the site of a bustling village, steamship dock and sawmill. Participants could choose French or English tours.
“The first two years we took an inland route, focusing on the horse railway that covered the 3.5 miles from Pontiac Bay to Union Village (just east of present day Pontiac Station). It started up in 1847 and was a great advancement, allowing
travellers and freight to bypass Chats Falls,” said organizer Bob Baser. “To provide more variety for those who have taken part before, this year we headed out on the river, starting on the bay where the steamships once docked,” he added.
The length of the steamship was marked with flags on the ice and participants could look up the steep slope where there once was a long flight of stairs passengers had to climb before reaching the horse railway terminus.
Other stops included the never-completed Georgian Bay Shipping Canal and a basin that once held up to 20,000 logs destined for the 102 by 96 foot, three-story sawmill John Egan built near the falls.
The furthest point of the tour was the Portage des Chats, used for thousands of years by the First Nations before the arrival of Europeans. Alexander Mackenzie described in his journals in 1793 that the portage was 274 paces long and that, at the top of the falls, it was another mile or so of challenging shallow water canoeing before the river deepened. Tour guides Bob Baser, Michael McBane, and Maude Lambert paid homage to the First Nations’ birch bark canoe. Light, fast and capable of carrying more weight than other boats its size, it was the key to the complex trade system.
The day ended with refreshments and socializing at the Women’s Institute in Quyon where displays were set up to further the knowledge of participants on the history of the area.