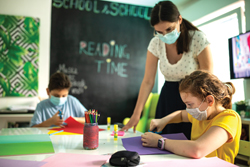 QUÉBEC – After presenting members with a proposed three-year sectorial settlement during general assemblies of unions represented by the Fédération des syndicats de l’enseignement (FSE–CSQ) and the Québec Provincial Association of Teachers (QPAT), votes were tallied May 17.
93% of Western Quebec School Board (WQSB) teachers voted in support of the agreement. Overall, teachers in the English system voted 88% in favour, while those in the French sector voted in the high 70s. Overall, 74% of members of the FSE–CSQ and QPAT indicated their acceptance of the sectorial settlement, although many expressed their disappointment when voting.
“Though teachers recognize interesting developments involving certain aspects such as occupational integration and autonomy, it was important for them to voice their disappointment despite their acceptance of the proposed settlement. They were expecting more from a government that came across as having made education a top priority. Consequently, Minister Roberge will not encounter the enthusiasm or smiles he hoped for given that this settlement does nothing to significantly alleviate teachers’ workloads. Heavy workload is precisely why teachers are getting sick and thinking about leaving,” said FSE-CSQ President Josée Scalabrini.
Items negotiated include a salary raise specific to teachers, which raises Québec teacher salaries from the lowest in Canada to average. Another key element in the
settlement focuses on adding extra special education classes and appropriate funding for teachers supporting special needs students. For the WQSB, the addition of five to seven extra classes is expected.
A teacher mentorship program will be set up so new teachers can receive help and guidance through their first years on the job. Mentors will be relieved of some
teaching duties in order to fulfil mentorship responsibilities.
Inter-sectoral negotiations continue
Negotiations in the public sector are divided in two: sectoral (issues specific to teaching), and inter-sectoral (applies to the entire public sector).
Although sectoral negotiations have concluded, the FSE-CSQ and QPAT agree
that inter-sectorial negotiations (which also includes teachers) must continue to address other significant issues such as parental rights, insurance, regional disparities and retirement.
Members of the Syndicat du personnel professionnel du milieu scolaire de l’Outaouais (SPPMSO-CSQ) held a strike on June 9 to demonstrate dissatisfaction with the government’s offers of salaries and improved working conditions made at the bargaining table. As a consequence, schools were closed and classes cancelled, including in the Pontiac.
Education professionals are divided into different categories of personnel in the administrative, pedagogical and direct student services sectors (analysts,
counsellors, psychologists, speech therapists, remedial teachers, etc.).
“We remain hopeful that negotiations for our support staff and professional colleagues, all full-fledged members of our school teams, will help improve their working conditions. Whether in terms of salary, work organization or additional resources, the improvements called for, even if currently disregarded by Québec, will clearly impact the attraction and retention of our colleagues as they consider working in the private sector or opting for less precarious work. Their working
conditions will also have a direct impact on our tasks as well as on the quantity and quality of services provided to our students,” said Scalabrini and Heidi Yetman, QPAT president.
However, Yetman said one of the problems they foresee is that if an agreement is reached on inter-sectoral issues in late June, it will make it difficult for them to study the terms, communicate them to their members, and finally hold ratification meetings to see if teachers approve.
The FSE-CSQ is composed of 34 unions representing more than 65,000 teachers in school service centres and school boards across Québec. It is affiliated with the Centrale des syndicats du Québec (CSQ) and
negotiates in collaboration with the QPAT, which represents the 8,000 teachers in Québec’s English school boards. Together, they represent 73,000 teachers. (AB)