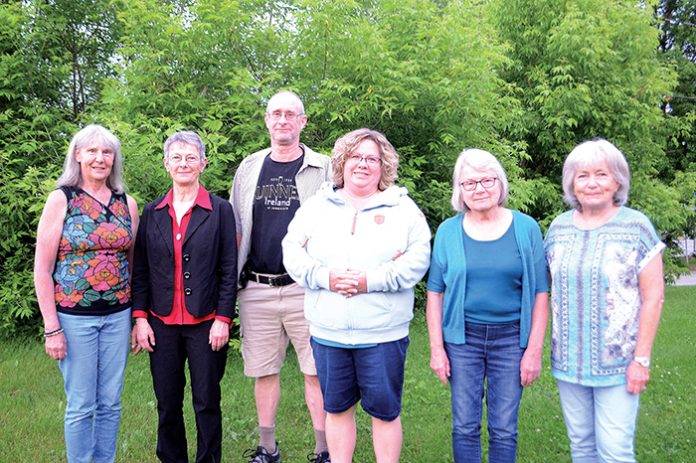 QUYON – The Friends of Chats Falls held their Annual General Meeting at the Sainte-Marie building of the École Vallée-des-Voyageurs in Quyon, Wednesday, June 8. The evening opened with a presentation of their new Archéo-Pontiac project. This pilot project consists of documenting, promoting and protecting the archaeological resources of the Municipality of Pontiac. The goal is to contribute to the advancement of prehistoric and historical knowledge of the area, as well as increasing the population’s access to cultural heritage. Various activities will be offered to students and the community over the next 15 months (September 2022 to December 2023).

This pilot project is made possible by the Cultural Development Fund (FDC), provided through the Entente de développement culturel (EDC) signed between the MRC des Collines and the Québec ministère de la Culture et des Communications. This project also benefits from the financial support from the Municipality of Pontiac.

Teacher and project committee member, Audrey Lapointe explained that the idea for the project began following a student outing, last September, marking Canada’s first Truth and Reconciliation Day; Ian Badgley, in-house archeologist for the National Capital Commission, came equipped with artifacts to show grades 3–6 students. Students biked from their school to Pointe Indienne on the Ottawa River on a route of discovery of First Nation and early settler culture and history. Badgley described the artifacts, all from the pre-contact era, some as old as 3,000 years, and students had the chance to look at them closely.

“The students were really fascinated to be out by the river and handle the objects. From that came the idea of extending that kind of experience to other schools and the public,” Lapointe said.

“This is an area that is very rich historically. We will find remnants of old trading posts, sawmills and other timber trade activities. Chats Falls is also the site of an ancient portage used by voyageurs and, for thousands of years, by the First Nations,” said Maude-Emmanuelle Lambert, historian and technical advisor for the Archéo-Pontiac pilot project.

The Friends of Chats Falls is a volunteer group incorporated as a non-profit in 2017. Their mission is to promote the cultural, historical and natural wealth of the Chats Falls region of the Ottawa River watershed through interpretative programs and sustainable recreational activities respectful of the area’s exceptional native biodiversity. The Chats Falls area also includes the municipality of Bristol and there are plans for an interpreted historical tour of Bristol Village as well as the possibility of a canoe/kayak outing later this year.

Activities and other news can be found on the groups FaceBook page “Les Amis du Sault-des-Chats.”