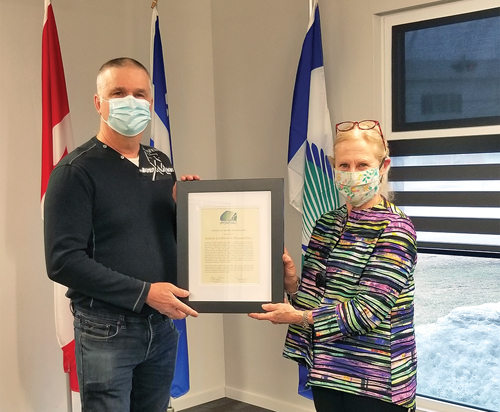 MRC PONTIAC – The monthly Council of Mayors (CoM) meeting was held via ZOOM, March 17, which again included a divided vote.
Public questions
Bernard Chartrand asked if small game hunting can be temporarily suspended in ZEC St. Patrice during moose season so it doesn’t disturb hunters. The Ministry of Forests, Wildlife and Parks (MFFP) governs hunting seasons, but if a request is made to the ZEC, they can sometimes modify dates.
Regarding the bio-park, Pat Goyette asked about Renmatix’s commitment
to establishing a bio-refinery in the Pontiac. Mayor Colleen Larivière (Litchfield) explained Renmatix hasn’t firmly committed yet, but if it does, it would be investing in the project as the operator, not the MRC. However, government funds could be contributed for the project’s implementation.
Sandra Lemire Wolf asked if it’s possible for the public to know what development projects are brought forward to the MRC. Warden Jane Toller noted the MRC has an investment committee made up of representatives from across the region and the CoM who have a good sense of what their residents want or not.
Jean-Pierre Landry asked how the MRC justifiestheir refusal to renew the
contract of Pierre Vezina, the forestry consultant working on the bio-park project. He also questioned if mayors were pressured to vote a certain way. Toller explained the mayors introduced “accountability measures” (government funding and firm commitment from Renmatix needed) since the MRC has already committed significant funds. She added that mayors represent their municipalities and make their own decisions.
Forestry
Mayor Winston Sunstrum (L’Isle-aux-Allumettes) introduced a resolution to allocate $25,000 of the remaining $50,000 in the PADF budget (unused because Vezina’s contract wasn’t renewed) to contract Vezina from April to June; that his services be offered to forestry projects and companies; and that the consultant’s primary goal be to assist the MRC in developing and adopting a strategic
plan for forestry. Sunstrum stressed that the money must be used by June 30 or risks being lost.
The matter ended in a tied vote with Mayors Carl Mayer (Alleyn-et-Cawood), Debbie Laporte (Fort-Coulonge), Serge Newberry (Calumet), Kim Cartier (Otter Lake), Gilles Dionne (Mansfield), Lynne Cameron (Portage), Jim Gibson (Rapides), Karen Kelly (Thorne) and David Rochon (Waltham) voting against it.
Toller didn’t vote, and when questioned, she said she learned that tied votes are automatically defeated. Following the meeting, she said she would have voted in opposition if her vote was given weight.
A certificate of recognition was given to Scierie Pharand et Lefebvre (Mansfield) director Yvon Mignault to highlight the mill’s success and perseverance in a time when other mills are closing. The mill, constructed in 2000, employs 22 people and produced 6,700,000 board feet of white pine lumber in 2020.
The CoM passed a resolution expressing interest in establishing a local forestry school with the Centre de services scolaire des Hauts-Bois-de-l’Outaouais.
Grants and money matters
The MRC authorized a $34,000 contribution to the Conférence des préfets de l’Outaouais (CPO) for 2021-2022. Toller explained the funds will be used to hire three people to advance files: “It will allow us to tackle some major issues and really have a strong voice for the Outaouais. I think we’ll see faster action and more funding.”
There’s $150,000 remaining in the Emergency Aid fund for Small and Medium-sized Enterprises (SMEs) that the MRC manages. Businesses enduring difficulties related to COVID have until June 30 to apply.
The MRC’s Creative Development Fund to support artists and artist
centers was launched with $5,000 from the MRC’s surplus for 2021.The fund is divided into a number of streams, each with $250 to $500 available.
The MRC will receive $900,000 over five years to implement the province’s Acces entreprise Québec program, a gateway for businesses to connect with services and organizations dedicated to entrepreneurs, providing high-quality
support, growth capital and investment, comparable from one region to another. A memorandum of understanding was signed with the Ministry of Economy and Innovation.
Cyndy Phillips, director of economic development, was authorized to approve and pay expenses related to the development of an immigration attraction action plan using $75,000 in funding from the Ministry of Immigration.
Other matters
The Pontiac Ouest Fire Safety Service is buying a search and rescue drone, which will be made available for use across the territory.
The MRC will apply for up to $15,000 in grants available from the MFFP for its solar mobile boat washing station based at the Sheenboro Visitor Station.
The mayors passed a resolution concerning Bill C-21 which gives municipalities the responsibility of regulating handgun storage and transportation on their territory. The resolution was based on one the Union des municipalités du Québec passed asking the federal government to revise its position and retain all responsibilities related to firearms management.
The mayors also moved a resolution asking the government to
consider postponing the November 2021 election to the spring of 2022 and to ensure future elections are held in the spring; Armstong voted against it.
The mayors also agreed to support internet development, particularly for a $69 million grant application Connexion Fibre Picanoc recently filed to connect 13,000 homes, and to contribute “within their capacity” to see it move forward.
The next CoM meeting will be held April 21.