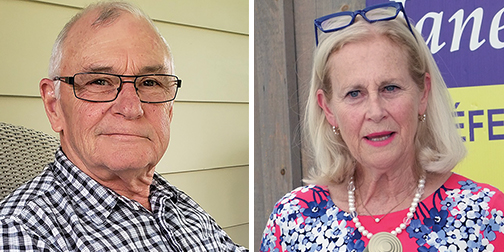 MRC PONTIAC ­– With the launch of the municipal election nomination period on September 17, two people have joined the race for warden in the region: current warden Jane Toller and former warden and Litchfield mayor Michael McCrank.
First elected in 2017, Toller, a former Toronto city councillor and local entrepreneur, held a press conference at the Pontiac Conference Center in Fort Coulonge on September 13 to announce her candidacy.
Many people, including local business owners Jim Coffey, Todd Hoffman and Sébastien Bonnerot, mayors Gilles Dionne (Mansfield) and Kim Cartier-Villeneuve (Otter Lake), former Fort-Coulonge mayor Hector Soucie, and representatives of the Pontiac Voice community group, were in attendance and spoke about Toller’s involvement in the community and her commitment to things like forestry, agriculture and tourism.
Hoffman described Toller as a visionary who’s determined to improve the region and address its needs. Bonnerot spoke of his first meeting with Toller at a wedding. After their conversation, he decided to move his family to the Pontiac and with the warden’s help, started his own business.
Finally, Toller spoke of projects currently underway: a flood prevention committee, revitalization projects in all municipalities, a youth council, and many others. Reviving the forest industry and finding a solution for the region’s waste through an energy-from-waste operation that could save the MRC millions are some of Toller’s most notable priorities.
Since the most recent municipal election in 2017, the MRC’s warden has been elected by universal suffrage. This was not the case when McCrank was elected; mayors appointed him to the position in the 2000s while he also served as mayor of Litchfield.
McCrank explained the various reasons why he’s running. Among other things, he feels the last few years have been marked by division on the MRC’s Council of Mayors, referring for example to the nine-to-nine vote on the contract of consultant Pierre Vézina, who was working on the biopark project; Toller voted in favour of ending the contract.
“I followed the meetings and was shocked that people weren’t working together and the warden had to decide. It’s a necessity to work with mayors to provide good customer service,” said McCrank, who noted the development of the biomass project is one of his priorities.
Among other priorities, he would like to see a better cellular network, the development of agriculture and to find new projects so the Pontiac can stand out.
In explaining his return to active politics, McCrank said his primary motivation is that he loves the Pontiac and believes it’s necessary to have a warden capable of working with all elected officials.
The municipal election will be held on November 7 and others may join the race in the coming weeks.
Follow the Journal for more information and updates.