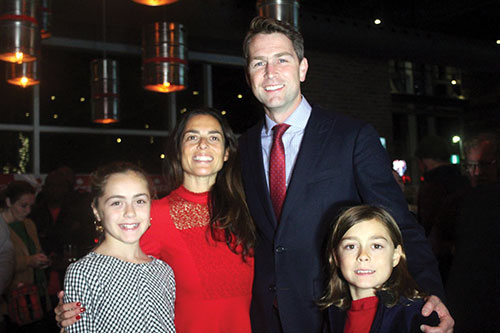 Amos celebrating his second federal election victory, alongside his wife Regina and children Paloma and Enrique in October 2019.

PONTIAC – Although Pontiac MP William Amos recently announced he will not run in the upcoming election, he looks back on the past last six years with positive memories and a sense of accomplishment. It was a demanding responsibility, but greatly rewarding privilege, he said.
Amos said he wants to keep serving the public while finding a better work/home life balance to spend more time with family. However, he said the decision wasn’t easy. While still considering a return to politics in the future, Amos said, upon a few months of reflection, that the time isn’t right for him and his family to take on the rigours of another political campaign.
“I loved the job and appreciated the opportunity to work on so many community projects and national policy issues that are important to all of us,” he told the Journal.
Amos was first elected in 2015 before winning the election again in 2019 with a more than 20,000 vote margin. He was subsequently assigned Parliamentary secretary for the Minister of Innovation, Science, and Industry.
From appearing at the Supreme Court of Canada, to speaking on behalf of the country at the United Nations a couple years ago, the 46-year-old Chelsea resident said he’s happy with his accomplishments as MP, including advocating for progressive reforms on issues like climate action, rural internet access, and Indigenous reconciliation, and is proud of his parliamentary legacy.
“My voice as MP for Pontiac has been heard loud and clear,” he said.
Of his proudest contributions, Amos pointed to his ongoing efforts of helping connect 29,000 homes in the Outaouais to fibre optic WIFI by September 2022 as part of Canada’s Operation High Speed Internet; his tabling of Bill C-28, Canada’s first national policy mandating climate action, giving the right to a healthy environment and implementing stricter regulations on the use to toxic substances; and an unprecedented $116 million land claim investment with the Algonquin community of Kitigan Zibi to help reconciliate relations between Canada and Indigenous people.
“Were it not for my efforts … [Bill C-28] likely wouldn’t have happened,” Amos said. “These are
the reasons people get involved in politics; so you can make those national scale changes. I wasn’t doing this for a paycheck.”
He also highlighted various regional and community projects to improve recreational and essential services, including investments to conserve protected natural areas surrounding the Black and Coulonge Rivers and improvements to local cycling infrastructure with the Cyclopark PPJ.
Amos said his experience as MP taught him how to lead, optimize resources, and be empathic in times of crisis as he was faced with numerous unpredictable challenges during his time in office:
the pandemic, the 2017 and 2019 floods, and the tornadoes of 2018.
Amos said he will certainly miss the job – especially the people it allowed him to connect with and the particularities of the Pontiac’s respective communities.
“I love the uniqueness of each of our towns and neighbourhoods, and the hard work that went into building relationships with community leaders,” Amos said. “Everyone had their own priorities and pet projects they were working hard on … on a personal level, that’s what I found so rewarding. You can’t create those relationships overnight. You have to build trust.”
Amos intends to continue building on his more than 20 years of experience in environmental law and politics by remaining impactful in public service one way or another.
“I don’t know what I will do next. We will see. I’m open to new opportunities, ideas, and suggestions. One thing’s for sure, my focus is on serving the public interest… Now it’s time for the next phase,” he said.
Until a new MP is elected, Amos will keep working alongside residents on important issues like rural internet access and helping evacuate refugees from Afghanistan.