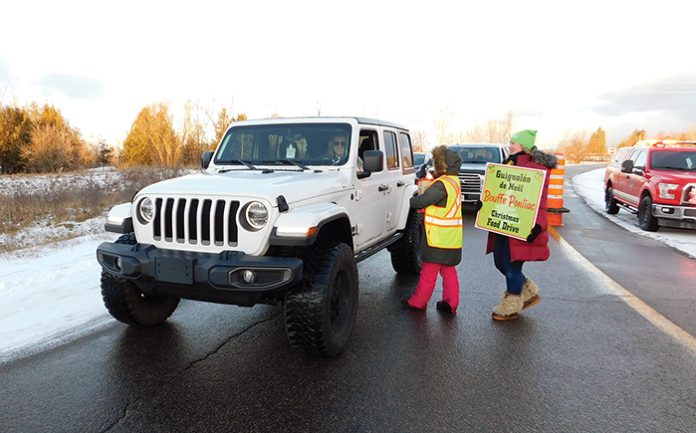 Bouffe Pontiac volunteers, members of the Pontiac Ouest Fire Safety Services and officers from the Sûreté du Québec, collected non-perishable food items and cash donations, Thursday, December 1, between 6 to 9 a.m. at the intersection of Hwy 148 and Pembroke Road on L’Isle-aux-Allumettes, during the annual Pontiac Food Drive. Checkpoints were also set up at several high-traffic areas throughout the region including the lights at Main and Centre Street in Shawville, and at the intersection of Hwy 148 and Hwy 301 in Campbell’s Bay.

According to CHIP 101.9’s interview with Kim Laroche, the director of Bouffe Pontiac, about 40 to 60 people volunteered to help this event and $11,877 was collected as well as approximately 215 kg of food items. Laroche explained that the number of people using this service has increased this year due to the increase in the cost of living, including the cost of food. Working in collaboration with the Knights of Columbus, who distribute in the Fort-Coulonge Mansfield area, Bouffe Pontiac’s food baskets will be distributed before Christmas. (PS)