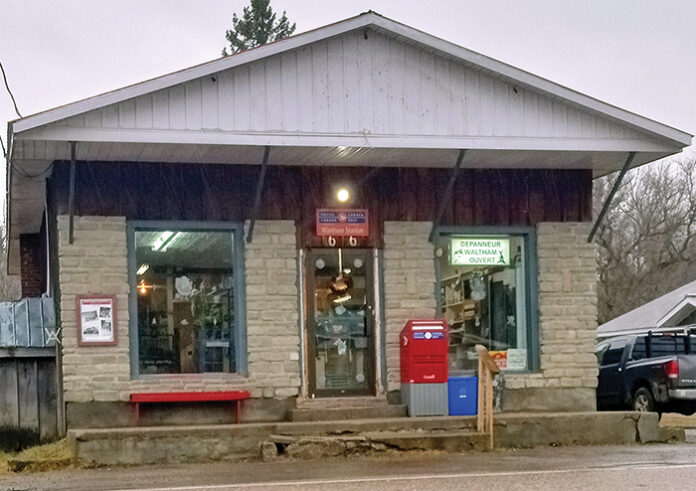 WALTHAM – As of December 31, the town of Waltham no longer has a depanneur, since owners Serge Chenier and Karine Caouette-Chenier closed their doors. The couple had operated the store and post office since April 2010 when they bought the business from Frank and Lorna Turner.

Two years of Covid resulted in a loss of income for the depanneur and an attempt to sell the business didn’t materialize. “We did have some very loyal customers throughout the years but could not keep the business going any longer,” commented Karine.

According to Waltham resident Betty Ryan, who wrote “Waltham, A Gem in Pontiac County”, the first store was built in the 1920s and owned by James Labelle and Robert Johnson. The store was owned by a couple of generations of the Johnson family before Arthur Labelle and his wife Eileen purchased the Johnsons share in the store around 1955. Art and his wife sold the store to Romeo Belanger in 1969.

Other families of Waltham owned and operated the business in the following years.

Waltham Mayor Odette Godin stressed, “It is always sad to see a business close down. It is especially hard to accept that for the first time in Waltham’s history there will not be a general store.”

The store closure also resulted in the municipality needing to find a new location for Waltham residents to receive mail. After discussion with Canada Post and the municipality, community mailboxes were erected near Paul Ryan Park on Main Street. Residents will need to use the Chapeau Post Office for all other mail-related services.