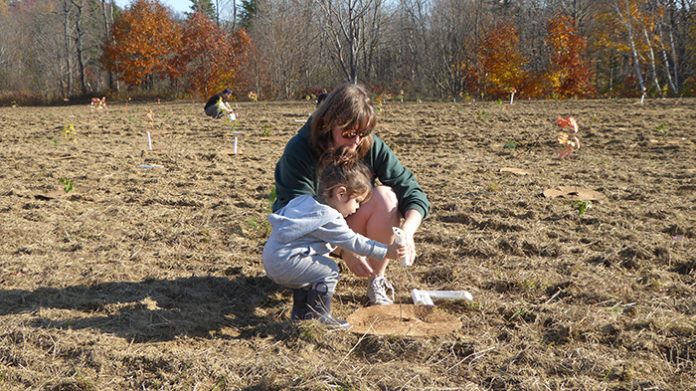 MUNICIPALITY OF PONTIAC – Saturday, October 22 was the big day in a week of volunteer tree-planting activity at Place Eco Rubin, located near Eardley Road. With volunteers hailing from the local area, numbers were also boosted with a group of forestry students from Collège La Cité in Ottawa.

The 15 hectare property bordering on Gatineau Park was donated in 2021 by Ken and Debbie Rubin to the ACRE Land Trust and features a stream, woodlot and hay fields, along with a host of vulnerable species such as chorus frogs, Eastern Whip-poor-will and butternut trees. The property forms part of an ecological corridor linking the park to the Ottawa River.

The tree planting project, aimed at naturalizing the 5 ha hayfield of the property, received full funding from the Natural Resources Canada 2 Billion Tree Program and the species at risk program of the Fondation de la faune du Québec. Specific focus is on restoring habitat for the Golden-winged Warbler, a species designated as threatened in Canada and in Québec due to its steep decline in the past several decades.

Nine species of trees native to the area were planted and all deciduous varieties were given spirals for rodent protection and coco mats to reduce vegetation growth in order to increase survival rates.