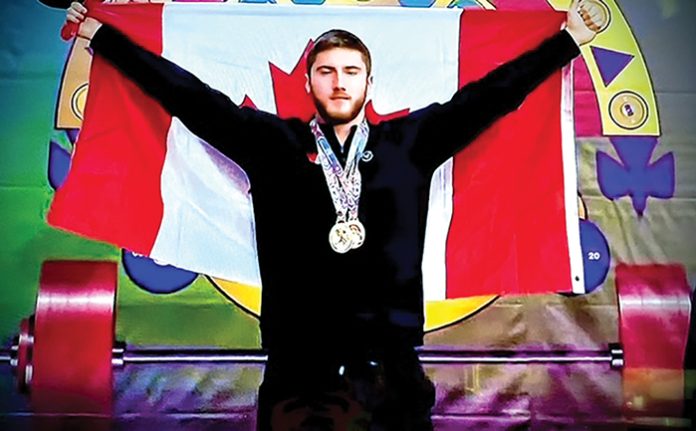 Xavier on podium with Gold Medal.

MANSFIELD-ET-PONTREFRACT – Xavier Lusignan of Mansfield won two Gold Medals for weightlifting in the Junior Pan-American Weightlifting Champion-ship in Peru on October 22, bringing recognition to his hometown, the Pontiac, and Canada.

Lusignan, just nineteen years old, was the winner in the overall amount lifted, and in the clean jerk. He placed second in the snatch. He competed in the 96 kg weight class.

Xavier’s sister Naomie, aged 17, also competed at these Games and improved on her previous best lifts. Naomie showed good progress in her first Junior Pan-Am Games and has three more years in which she is able to compete at this level.

Xavier was effusive in his thanks to his family, his teammates and to the community for their support. “I started weightlifting when my father introduced me to fitness training, and it seemed a natural fit for me. I brought home three beautiful souvenirs from Peru and I am not stopping here.

“Placing so well in these games is a very difficult thing to do, so I am very happy with what I did. I have bigger goals in mind, including next summer’s Olympic Games. My family and the community support have allowed me the opportunity of participating in the Games. I want to thank my coaches and my teammates for being there for me all the way,” he said.

The mayors of MRC Pontiac had recently approved a $500 grant towards his expenses in Peru as well as the same for Naomie.

Sandra Armstrong, mayor of Mansfield said to the Journal, “We are very proud of Xavier’s determination, his discipline and hard work. He was tireless in working towards his goal of being the best in his class.”

Xavier’s father Sylvain said the Pan Am medals were a big accomplishment for Xavier. However, he will need to put on more weight and strength in order to be able
to compete in the weight-lifting class featured at the Olympic Games.

Xavier and Naomie are back in Canada, back to school and back to training. Xavier wants to finish his third year of CEGEP and then plans to go on to university.