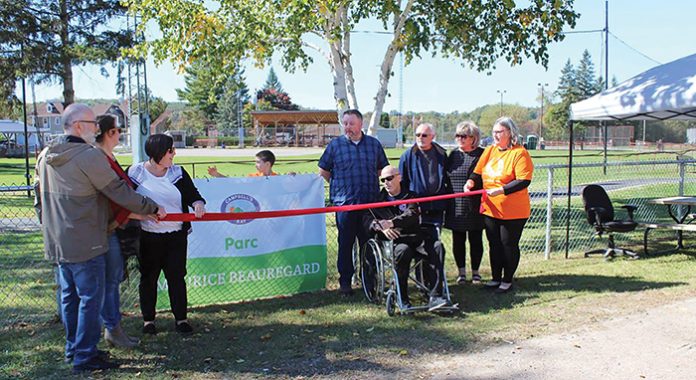 CAMPBELL’S BAY – A large crowd of Campbell’s Bay and neighbouring town residents as well as elected officials gathered at Campbell’s Bay’s municipal park, September 30, to officially inaugurate its recent upgrades. The park was also named in honour of the town’s mayor, Maurice Beauregard, who was instrumental in its rejuvenation.

Councillor Tim Ferrigan explained how over $150,000 has been invested in the town’s downtown core over the last four years, with Beauregard playing a large role in the projects; the creation of mural park, and upgrades to the playground including a splash pad, and most recently, a paved walking path and new play structures, including some for those with physical disabilities. Washrooms for park and PPJ trail users will be added in the future as well as outdoor games.

“He wanted children to have a safe place to practice various sports and leisure activities,” said the municipality’s press release.

Ferrigan described Beauregard as a fighter, who has dedicated his life to fighting for his friends, family, community and now a battle with metastatic cancer which he was diagnosed with six months ago. Pontiac MNA Andre Fortin reiterated Beauregard’s dedication and devotion to his community, with Warden Jane Toller presenting him with the MRC Pontiac’s Paddle of Achievement Award which recognizes “outstanding” achievements; Beauregard is the fourth recipient.

Beauregard served as a municipal councillor from 2013 to 2017 when he was elected mayor. He is also a long-time member of the local volunteer fire department.