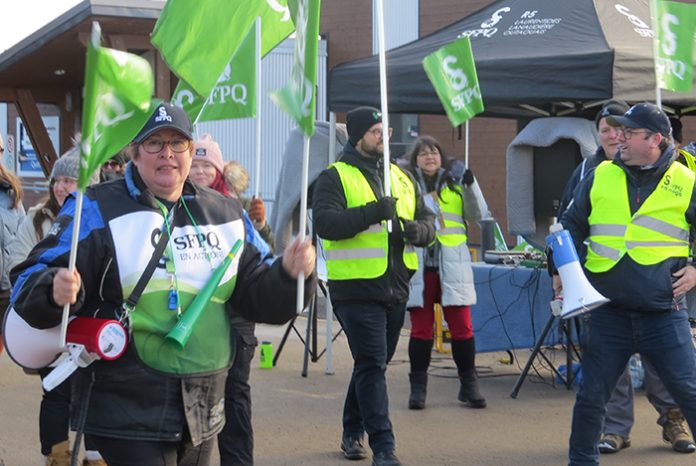 Striking government (SFPQ) workers held a boisterous protest on Wednesday, disrupting services at the MRC offices in Campbell’s Bay. Negotiations had stalled over wages but are set to resume soon.  (NB)

CAMPBELL’S BAY – The MRC office in Campbell’s Bay was the scene of a raucous and enthusiastic demonstration on Wednesday, November 23. Employees who are members of the Syndicat de la fonction publique et parapublique du Québec (SFPQ), the union of government workers in Quebec, spent the day outside, protesting the lack of progress in contract negotiations. The MRC employees have been without a contract since December 2021.

“They have walked away from negotiations,” said Michel Girard, the regional president. “Government workers in the Pontiac are paid less, on average, than employees working the same jobs in neighbouring regions,” he noted. “SFPQ employees in other regions have negotiated contracts that include a wage increase; if we were offered those same terms, it would be acceptable to us. As wages in the Pontiac are generally lower to start with, this still leaves us earning less, on average, than our colleagues who perform comparable jobs in other regions. However, they are asking us to accept a pay increase of only 13.25% over the next five years, which is lower than contracts negotiated elsewhere. Our salaries in the Pontiac already lag behind other regions. This would result in an even wider gap in pay,” Girard explained.

According to Girard, a ‘final offer’ was extended two weeks ago, but the union opted to reject it, with the workers holding out for a 14.5% increase over the next five years. “Considering the cost of living right now and what’s happening with inflation, the majority of our wage increase will be immediately absorbed.  We are seeking a wage increase that is on par with our peers. We deserve to be compensated fairly,” stated Girard.

At the mayor’s council on Wednesday November 23 it was agreed that “negotiations with the union would resume”, according to Warden Jane Toller. “For the moment, there is no further strike action planned, as the employer has committed to returning to the table. We are hopeful that we will achieve our goal of reaching an agreement,” Girard confirmed after hearing the news.