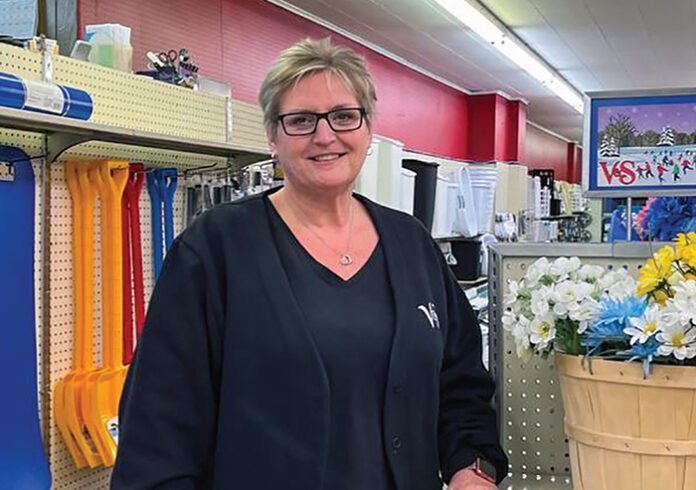 Rhonda Meisner has been involved in running Stedmans V&S on Main Street, Shawville for over 25 years.

SHAWVILLE – The familiar and established icon, Stedmans V&S department store, has been a mainstay in Shawville’s retail district for as long as most people can remember; recently, the building was put up for sale. Rhonda Meisner, the current manager, has been there almost as long. “I started working here when I was 12, helping my parents,” she recalled. “Now it’s my parents helping me manage the store.”

The decision to move on is a big change for Meisner, but she insists the time has come. “For the last twenty-five years I really haven’t had a chance to do much aside from run this
business,” she explained. “The store is a big responsibility, and it demands a lot from me.”

There are additional factors that influenced her decision to try and sell. “The way people shop now, since the pandemic—it’s different,” Meisner explained. “People are buying more and more from online retailers. Most ‘brick and mortar’ stores aren’t seeing the usual patterns in the way people shop—holiday shopping over the last few years hasn’t been as active as it was in past years. Over time, we’ve seen a gradual decrease in revenue, due to online stores like Amazon, or giant, impersonal outlets like Walmart.”

Meisner insists the store will remain open until they find a buyer for the building. But customers will eventually notice a change in available inventory. “I’ll be doing minimal ordering and restocking, so some departments will start to have less variety,” she explained. “We have a lot of regular customers, and we know what they come in for—greeting cards, stationery and toys are daily sales. I’ll make sure we have what they need.”

French language laws in Quebec are problematic for businesses, acknowledged Meisner. “I really don’t know what the government is hoping to achieve with these rules, but making business owners comply with restrictive language laws creates additional fear and hardship. It’s a factor in my decision,” she concluded. “Amazon will take your money in any language.”