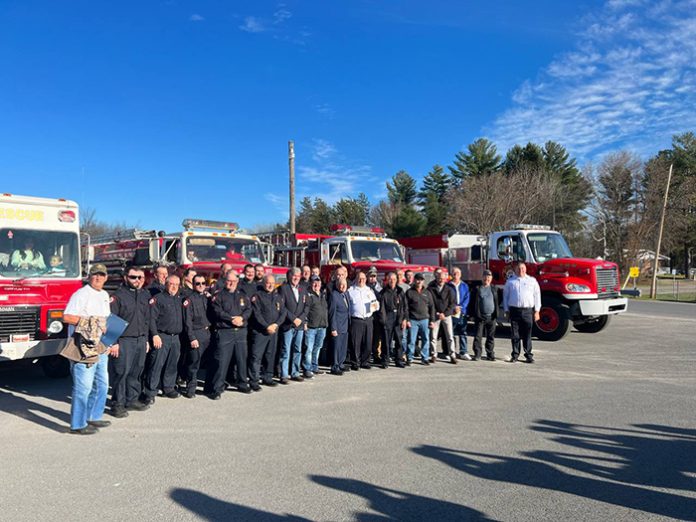 MANSFIELD-ET-PONTEFRACT — Mansfield fire department held its 40th anniversary celebration with two years delay, on November 5, at the Mansfield Fire Hall. Over 100 people attended including Warden Jane Toller and Mansfield’s mayor, Sandra Armstrong.
Originally the ceremony was to be held in June 2020 for their 40th anniversary, but due to Covid-19 it had to be postponed. Patrick Bertrand, Fire Chief the department told the Journal: “The event was a big success. A lot of old fire fighters were present along with their families. We decided to have the ceremony at the fire hall because there is a bronze plaque naming the over 100 firefighters who have served the department from January 1980 till January 2020.”

During the ceremony Sandra Armstrong spoke. “It is an honour to officially pay tribute to you for your heroic acts…..where you have shown dedication, leadership …..acts of courage, composure and heroism. Thank you to each of you who protect our most precious assets. You have my admiration and that of the Council of the Municipality of Mansfield-and-Pontefract.”

Three founding members of the fire department were honoured for their many years of service: Lenord Laroche, Darcy Belair and Larry Pleau. Certifcates were given to all the fire fighters present or their families. Lunch was served to finish the event.